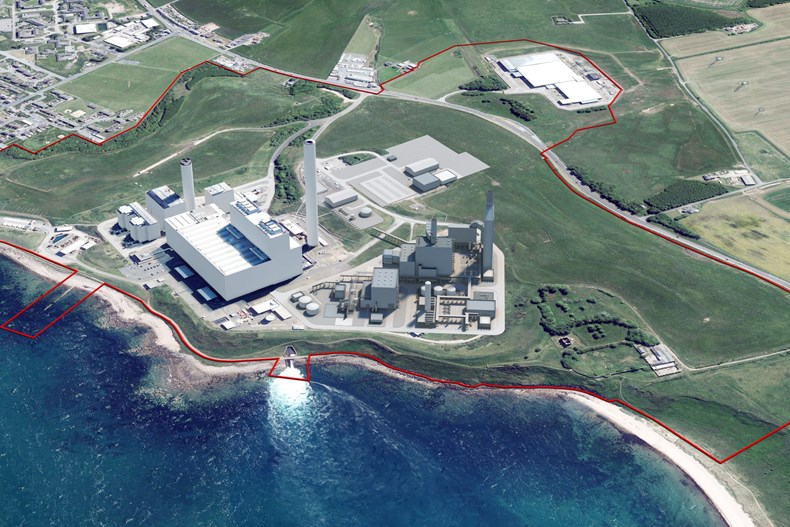 Plans for a new low-carbon power station at Peterhead have taken a major step forward, with developers SSE Thermal and Equinor submitting a planning application for the project.

The proposed 910MW Peterhead Carbon Capture Power Station, on the Aberdeenshire Coast, would become Scotland’s first power station equipped with a carbon capture plant to remove CO2 from its emissions.

In January, SSE Thermal and Equinor entered the Peterhead project into a UK Government competition which aims to support industrial clusters to decarbonise. Earlier this month, it was announced that the project will progress to full evaluation stage as part of Phase 2 of the process. Now, a Section 36 planning application has been submitted to the Scottish Government’s Energy Consents Unit, another vital step in turning this first-of-a-kind project for Scotland into reality.

This would allow the Peterhead site to continue providing flexible power to keep the lights on, while facilitating the transition to net zero. As Scotland continues to lead the way in renewable energy, bolstered by the recent ScotWind awards for 25GW of offshore wind, Peterhead Carbon Capture Power Station will be crucial in providing low-carbon flexible power when the wind doesn’t blow. This proposed project will support the SSE Group’s Net Zero Acceleration Programme, which will see £12.5bn invested in the five years to 2026, or £7m every day.

In total, the proposed new station could capture an average of one and a half million tonnes of CO2 a year, which would represent at least five per cent of the UK Government’s 2030 target for carbon capture and storage (CCS). The project would connect into the Scottish Cluster’s CO2 transport and storage infrastructure, which underpins plans to deliver one of the UK’s first low-carbon industrial clusters.

Situated on the north-east coast, the Peterhead site is ideally placed to access the Acorn storage site in the North Sea, which will be used to safely store the CO2 from emitters in the Scottish Cluster. The Scottish Cluster is currently in 'reserve' status, however there is a clear need for all industrial clusters in the UK to be decarbonised. With the necessary policy mechanisms and infrastructure in place, and with the Scottish Cluster supported by UK Government, Peterhead Carbon Capture Power Station could be operational as early as 2027.

"Peterhead Carbon Capture Power Station could provide flexible low-carbon power while backing up the renewables-led system and will be crucial to a secure energy future for Scotland and the UK."

Martin continued:
“Significant progress has already been made by the UK Government on CCS policy and associated business models – that must now be followed by greater ambition in terms of the number of power CCS projects supported this decade, allowing carbon capture to fulfil its essential role in achieving a net zero power system in the 2030s.

“By delivering the proposed new station with Equinor we can not only support a secure and affordable transition to net zero, we can also maximise the benefits of the low-carbon revolution for workers and communities in the north-east of Scotland. Projects such as this underline our wider commitment to delivering on decarbonisation targets, with SSE investing £12.5bn to 2026 to power the UK’s energy transition through our Net Zero Acceleration Programme.”

Grete Tveit, Senior Vice President for Low Carbon Solutions at Equinor, said:
“This is another important step in the longstanding partnership between Equinor and SSE. Peterhead Carbon Capture Power Station will make a significant contribution towards the UK’s net zero ambition, while also working alongside intermittent renewables and enhancing low-carbon energy security. Equinor and our partners are dedicated to delivering our hydrogen and CCS projects to help the UK become a world leader in hydrogen and low carbon, safeguarding high-value jobs and creating thousands of new ones.”

Charlie Youngs, Head of CCS at the Scottish Cluster, said:
“This is an exciting milestone for one of the Scottish Cluster’s key low-carbon energy projects. With Peterhead Carbon Capture Power Station hoping to be fully operational in 2027, we are continuing to work with both the UK and Scottish Governments to ensure the Acorn CO2 transport and storage infrastructure will be ready to safely and securely manage the CO2 emissions from this plant.”

SSE Thermal and Equinor are also in the development stage on three further projects, all located in England’s Humber region. Keadby 3 Carbon Capture Power Station would plug into the shared pipelines being developed through the East Coast Cluster, with the CO2 stored under the Southern North Sea. Meanwhile, Keadby Hydrogen would be the world’s first major 100% hydrogen-fuelled power station. Elsewhere, Aldbrough Hydrogen Storage, located in East Yorkshire, would be one of the world's largest hydrogen storage facilities.