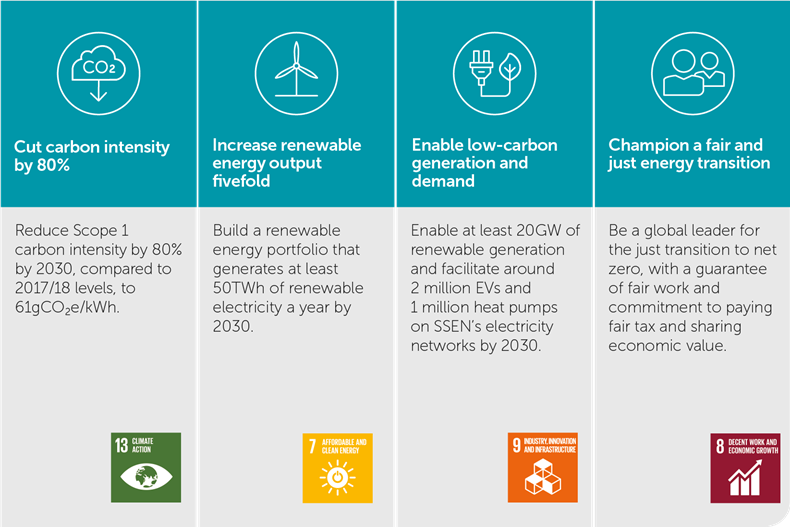 SSE, the UK’s national clean energy champion, will deliver a fivefold increase in its renewable output and cut carbon intensity by 80% by 2030 as it accelerates its net zero action plan.

The FTSE-100 low-carbon infrastructure company today announced its four core 2030 business goals, aligned to the UN’s Sustainable Development Goals (SDGs), were being upweighted to drive faster decarbonisation across the next decade.

SSE’s 2030 Goals are already linked to executive remuneration but it is also proposing to increase the emphasis on sustainability overall as well as focusing it more to the longer term.

The Goals increase the company’s climate ambitions and are part of its drive for net zero which saw the business unveil a £12.5 billion Net Zero Acceleration Programme in November.

The last 18 months have also seen SSE become a leader on the just transition to net zero, with its ranking at the top of the World Benchmarking Alliance’s just transition assessment of 180 global companies. Its fourth 2030 Goal will continue this leadership and champion a fair and just energy transition, by guaranteeing fair work, committing to paying fair tax and sharing economic value.

SSE broke new ground when it first announced its SDG-aligned 2030 Goals in 2019 and this update makes the targets more stretching after strong delivery over the last three years.

We were one of the first companies to link strategic business goals to the UN’s Sustainable Development Goals and to directly link these global goals to executive remuneration. I’m delighted that the progress we’ve made since then means we’re in a position to stretch those 2030 targets further.

The four ambitious objectives underpin the pace of change we are driving as part of our Net Zero Acceleration Programme."

SSE is currently building more offshore wind than anyone in the world including the world’s largest offshore wind farm at Dogger Bank, and owns and operates three of Britain’s electricity networks. It has increased its capital investment by two thirds – £1bn more annually – to support the global push to decarbonise.

You can find out more about its 2030 Goals here, and its Net Zero Acceleration Programme here.