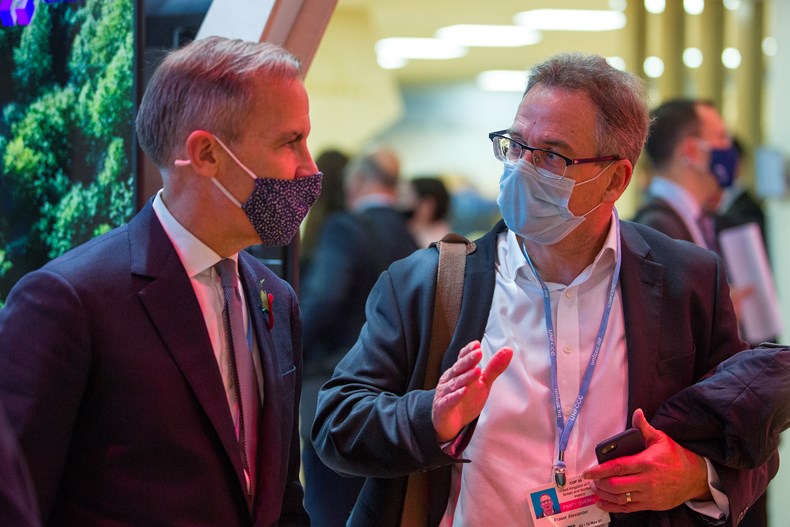 As world leaders gather in Glasgow, one of the key issues is how to mobilise enough finance globally to fund massive investment in clean energy, adaptation and resilience needed in the years ahead.
Mark Carney, the UN special envoy on climate action and finance, once called the world’s net zero transformation “the greatest commercial opportunity of our age”. It’s hard to argue. The effort to shift humanity from its reliance on fossil fuels is set to spark a sweep of sustainable projects around the globe, revolutionising everything from energy generation to the batteries that power our cars.

But the drive to decarbonise energy production won’t pay for itself. The International Energy Agency estimates that annual investment in clean energy needs to more than triple by 2030 – to more than $4 trillion (£2.9 trillion) – in order to meet the goal of net zero emissions by 2050. This is where the world of green finance comes into play.

Take green bonds. Issuing debt via bonds is one of the most popular ways for large organisations to raise funding. In green bonds, first introduced by the World Bank in 2007, that capital is generated to invest exclusively in environmental projects.

According to analysis by the Climate Bonds Initiative, green bonds are now outperforming regular bonds in terms of demand. When the UK government’s inaugural Green Gilt listed on the London Stock Exchange’s Sustainable Bond Market in September 2021, it raised £10 billion to support green jobs. In the EU, green bonds are set to provide 30 per cent of Covid recovery funds.

Meanwhile, the biggest issuer of green bonds in the UK corporate sector is SSE.

"We issued our inaugural €600 million (£508 million) green bond in September 2017, and were recognised by the LSE for our innovation in green bond issuance.

In March, we issued £500 million of green bonds, and have now done around £2 billion-worth in total. Investors want to be associated with renewables."

Indeed, as businesses across the board step up their efforts towards net zero, it is in part about reacting to growing pressure from the financial markets to show initiative towards supporting decarbonisation. While the appetite for sustainable investment slowed in the wake of the 2008 crash, interest in green assets is now rising again thanks to the urgency of the climate message, the impact of the pandemic and the focus on using the net zero pledge as a stimulus to drive new opportunities and jobs.

As we approach, and emerge, from Cop26 the drive for this is going become all the more acute. Business and governments are going to have to unlock the vast sums of green finance needed to fight climate change. SSE has certainly done its fair share towards this.
“We’ve been pretty progressive in looking at opportunities, and have taken some bold decisions in getting there,” says Alexander of the firm’s move towards sustainable energy generation.

Having “powered past coal”, SSE is set to invest billions over the next five years in tripling its renewables output. It’s a lead partner in building Dogger Bank, the world’s largest offshore wind farm; Seagreen, the deepest wind farm; and Viking, one of Europe’s most productive onshore wind farms in the Shetland Islands.

In 2007, SSE built the first conventional hydro station in northern Scotland for 40 years, in Glendoe, and it has submitted proposals for a 1500MW pump storage facility at Coire Glas, to create reliable supplies from the North Sea’s unpredictable winds.

The world’s renewables provision is set to grow at 600GW a year. Meanwhile, the relatively young green bond market is already worth more than $1 trillion, and the range of products available to investors is expanding all the time. Alexander insists that a proportion of every fund manager’s portfolio will soon be required to be a green investment. That may seem unlikely now but, as he points out, we’ve seen this very shift in other facets of sustainability.
“I have no doubt green bonds will come into their own, especially in the months and years following Cop26,” says Alexander.“A few years ago, people said the uptake of electric vehicles in the UK would be slow, but one tweak to the tax system around taxable car benefits means most company cars will be electric by 2029. That’s a big change.

“The same will happen in green bonds: fund managers will have to meet a certain percentage of their investments as green bonds. And if they don’t, they’ll be derated.”

Green bonds represent a safe bet for investors. Modern standards demand the issuer demonstrate where the money has gone, through regular transparent reporting, removing any fears of greenwashing and providing security to investors.

For the issuers of green bonds, meanwhile, the logistical complexity of massive decarbonisation projects does bring an inevitable risk factor. For Dogger Bank, for example, SSE’s supply chain stretches from the UK to the Middle East and China.

But, as Alexander is keen to point out, there are other, more significant dangers for companies operating in this space.“The bigger risk is to remain with legacy assets,” says Alexander, arguing that change is inevitable. “You can’t afford to sit back and not decarbonise your business.”

This will become even more apparent with the arrival of Cop26. Like its 2015 predecessor in Paris, it will offer the world another chance to adopt a joined-up decarbonisation strategy.

Carney has described Cop26 as “a watershed for finance”. Indeed, while green bonds still represent just 1 per cent of all bonds in the current market, the direction of travel is clear. While the net zero effort requires new grid capability, new supply chains, and innovation in everything from transport to heat pumps and hydrogen storage, it will be powered by green finance that continues to blossom alongside it.

This article first appeared in the Times and Sunday Times