SSE on the road to a fully electric fleet 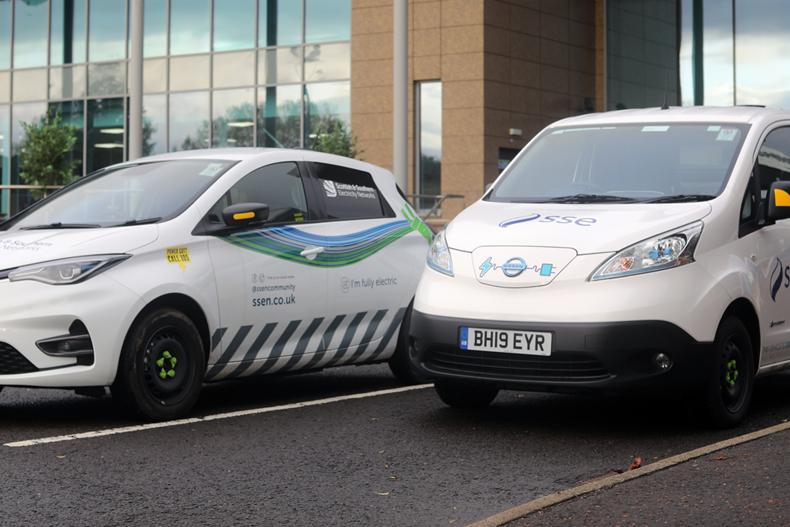 LOW carbon energy firm SSE is leading the charge on EVs, as it reveals the business is ahead of schedule in switching to a fully electric fleet.

As a principal partner to world climate summit COP26, and one of the UK’s largest energy infrastructure companies SSE, has recognised the crucial role the decarbonisation of transport will play in meeting Net Zero.

In 2019 the company joined The Climate Group’s global EV100 initiative, which aims to make electric vehicles (EVs) ‘the new normal’ by 2030. And pledged to switch 2,785 of its vehicles to electric and install charging points for its 10,000 employees to use.
It has now revealed it is on track to have almost half its car fleet fully electric by early next year whilst continuing to work on transitioning it’s Van fleet as more products become available.

In just over two years since membership the Group has already taken delivery of over 400 fully electric vehicles with another 225 on order, meaning 30% of the car fleet fully is electric and will be moving to 47% by early 2022. To support this journey the business has already installed 180 charge points across its sites, from the Isle of Wight in the south to Lerwick on Shetland, with another 200 set to be delivered in the next 12-14months.

“EV uptake is growing across the UK and this is also reflected in the great progress in transitioning our fleet to fully electric. The number of ultra-low emission vehicles available is increasing year on year which greatly supports with our strategies and Net Zero initiatives” .
“Our network’s business SSEN has committed to invest in its network infrastructure to support 10 million EVs on GB roads by 2030.

“But as one of the largest fleet operators in the UK we must also lead by example and show the way on the EV journey.

“That’s why as a member of The Climate Group’s global EV100 initiative, which aims to make electric vehicles (EVs) ‘the new normal’ by 2030, SSE Plc is already well on the way to a low carbon future following a commitment to electrify our fleet by 2030.”