As renewables come to dominate electricity generation in the UK in the years ahead, an important question arises: how we balance those days when the wind doesn’t blow, and the sun doesn’t shine?

Our power stations across the UK and Ireland already play a vital role, providing much needed flexibility and security of supply – but there is a clear need for these to be decarbonised if we are to reach Net Zero. That’s why we need to find new ways to both keep the lights on and emissions low.

One answer is by using Carbon Capture and Storage (CCS) technology.

What is carbon capture and storage (CCS)?

Carbon capture and storage (CCS) is a process that captures the vast majority of carbon dioxide from industrial sites and stores it so that the gas doesn’t enter the atmosphere.

It has the potential to play a significant role in the energy transition by enabling the continued use of flexible power stationsbut at a substantially lower cost to the environment.

The Committee on Climate Change has described carbon capture and storage as a ‘necessity, not an option’.

Making the UK a world-leader in CCS

The UK Government aims to develop a world-leading position in CCS technology. They have set a target to use the technology to capture and store between 20m to 30m tonnes of CO2 per year by 2030. To get there they have established a £1bn investment fund to support development of the technology alongside private sector investment.

In 2021, the Government identified two Track-1 clusters that will receive support under the government’s scheme if they ‘represent value for the consumer and the taxpayer’. The target is to have at least two clusters operational by 2025.

The two Track-1 clusters are the East Coast Cluster that covers the major industrial areas stretching from Teeside to the Humber and HyNet, based in the North West of England and North Wales.

With the right policy mechanisms and pipeline infrastructure in place, Keadby 3 Carbon Capture could be operational by the mid-2020s, capturing at least 1.5 million tonnes of CO2 annually.

Keadby 3 Carbon Capture would connect into the shared CCS infrastructure being developed by the East Coast Cluster. This would see its emissions transported through shared pipelines and safely stored under the Southern North Sea.

The economic contribution of Keadby 3 to the local, regional and UK economy will be c.£2.2bn according to a report by BIGGAR Economics.

In addition to Keadby 3 Carbon Capture, SSE Thermal and Equinor are also progressing plans for the world’s first major 100%-hydrogen-fired power station at the Keadby site.

Hydrogen can replace natural gas as the fuel for flexible thermal power stations. As an energy vector that does not contain carbon, there are no carbon dioxide emissions at point of use. Instead, when burnt with oxygen, the by-product is water. Both ‘blue’ and ‘green’ hydrogen can be used to generate low-carbon electricity.

Blue hydrogen is produced from natural gas with the resultant carbon emissions captured and stored at this point.

Green hydrogen is created through the electrolysis of water. This process uses renewable electricity and is therefore carbon-free.

Keadby Hydrogen Power Station would have a peak demand of 1,800MW of hydrogen, producing CO2 at the point of combustion.

Like Keadby 3 Carbon Capture Power Station, it would back up a renewable-led electricity system with large-scale and flexible, low-carbon power. As a large hydrogen user, it would help secure demand for hydrogen in the region for decades to come.

In addition to power generation, hydrogen will undoubtedly play a key role in the decarbonisation of heavy industry, heat and transport across the UK, with a recent doubling of hydrogen production targets by the UK Government

With the appropriate policy mechanisms and infrastructure in place, Keadby Hydrogen could come online before the end of the decade.

The station, which will have a generating capacity of up to 910MW, will utilise leading technology and infrastructure to deploy carbon capture technology, enabling the vast majority of emissions to be captured.

Like Keadby, the economic benefits to the North East of Scotland will be substantial. 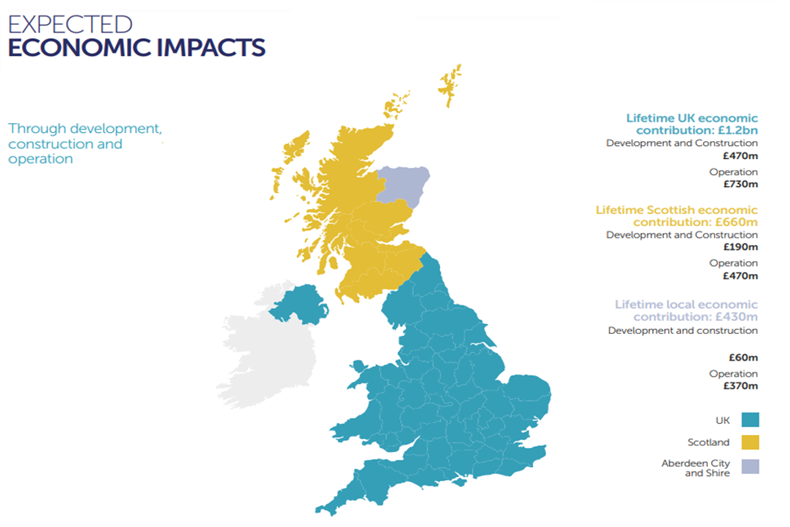 Peterhead Carbon Capture Power Station could be operational by the end of the 2020s, capturing up to 1.5 million tonnes of carbon annually by 2030.

CCS and hydrogen are capable of making a major contribution to the UK’s net zero targets. The UK Government has already taken significant steps, from launching its Cluster Sequencing Process to outlining a clear Hydrogen Strategy.

But currently, the stated commitment is to deliver at least one power station with carbon capture and storage in the mid-2020s. A simple comparison with the Climate Change Committee’s recommendations shows this isn’t enough, with multiple CCS-equipped power projects being needed by 2030 to keep the UK on a trajectory to net zero.

Delivering the largest of these projects in development in the UK by 2027 would only provide between 700MW and 800MW of generation capacity. That may seem considerable, but the reality is that it is set against a backdrop of 8GW of aging nuclear closing this decade, 5GW of coal capacity legislated to close in 2024, and the significant increase in demand which is expected as heat and transport are electrified.

While an increase in renewable capacity will do the heavy lifting to meet this challenge, it won’t be able to do it alone. We will need to fill the gap with flexible, dispatchable, low-carbon capacity to ensure a secure energy system and avoid carbon lock-in for another generation.

If we are to meet our net zero ambition, we can’t wait until the 2040s to deploy power stations with carbon capture or hydrogen fuel at scale. We need to start deploying them as soon as possible, and certainly within this decade. Not only will this help fill the capacity gap we expect to see in the near future, but it will also help establish the UK as a destination for investment in CCS and hydrogen skills and supply chains and have a positive impact on our overall electricity system costs. Deploying an additional 2.5GW of CCS power projects by 2030, for instance, could put us on the road to delivering an overall cost benefit to the electricity system of £7.5bn by 2050.

To find out more about SSE's CCS and hydrogen plans and projects visit SSE Thermal.