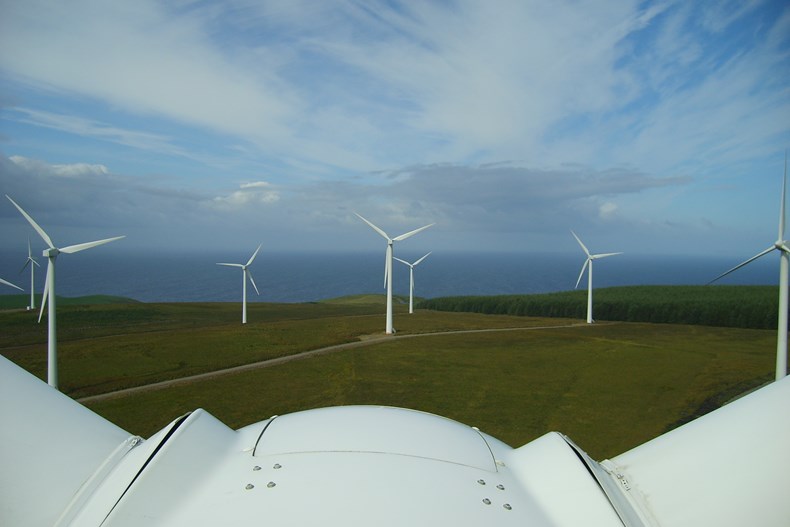 SSEN Transmission and its Principal Contractor Partner, Omexom Morgan Sindall Infrastructure (OMSI) have been working on the construction phase of this connection project since June 2021. The completion of the Project allows the transfer of electricity from the new Creag Riabhach Wind Farm to the population centres in the south. The project involved the construction of approximately 22km of 132 kV overhead line supported by double Trident ‘H’ wood pole structures, 1.4 km of underground cable and a new switching station at Creag Riabhach Wind Farm.  Key to the success was the work carried out by sub-contractor Norpower, who installed the overhead line, continuing work through the arduous winter months and difficult terrain to meet the deadline.

Projects like this are essential as they help facilitate the transmission of clean, green energy to the country’s electricity grid, playing a role in supporting the transition to net zero emissions and the fight against climate change.

Since construction began teams took the utmost care to avoid impacting the environment during the project’s delivery, including using helicopters to deliver materials to avoid disturbing the sensitive peatlands on the route.  Particular care was taken to avoid disturbing nesting birds and other precious wildlife such as badgers, water vole, pine marten, otter and bats which were identified in the area.

Wooden crates used to store components for the new overhead line were repurposed and turned into 54 nesting boxes for owls and kestrels installed across northern Scotland, with one box already creating a home for two healthy tawny owl chicks which were hatched this year.

"We have a key role to play in the transition to net zero emissions, that is why it is essential that we deliver these important projects on time and maintain momentum towards this target."

“Energising on schedule is a testament to everyone’s hard work and dedication, in the often challenging working conditions brought by the Scottish Highland weather and remote location.  The team came together to deliver this project safely, and while this project hasn’t been without its challenges, it is testament to the team’s experience, professionalism and dedication that when faced with problems we have worked together to reach solutions.  As a project team we are proud of the role we are playing in delivering a network for net zero.

“We would also like to thank the communities and land owners along the route for their interest and engagement throughout the build. Without their support, the project and its contribution to mitigate climate change would not have been possible.”

With the line now energised the Creag Riabhach Wind Farm Limited team will work to bring each turbine online. We wish them well for their remaining work and bringing the wind farm up to full export capacity. Once fully operational, Creag Riabhach Wind Farm will generate up to 92.4MW of clean, renewable energy, with the potential to power up to 70,000 homes annually and reduce CO2 emissions by 125,000 tonnes.