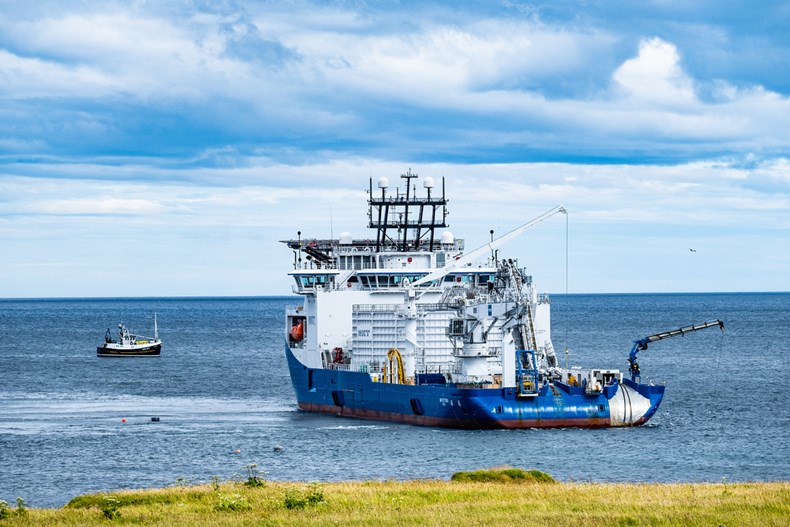 Starting in July, the subsea HVDC cable was successfully pulled-in to where it makes landfall at Noss Head near Wick from aboard the specialist cable-laying vessel NKT Victoria, and was carefully installed onto the seabed as the vessel made its way out to sea to a point east of the Orkney Isles. Once the cable was installed on the seabed, where possible it was trenched into position using Grand Canyon III, a multi-role construction support vessel with a specialist subsea jet trencher.

The successful installation of the first 100km of cable required careful coordination between the NKT Victoria, multiple subsea divers as well as the shoreside cable pull-in team at Caithness, who worked to install the cable through the previously constructed horizontal directional drilled (HDD) ducts at Noss Head in Caithness.

Back onshore, teams have also completed the installation of the HVDC cables in Shetland, marking another major milestone for the project with all onshore HVDC cables now installed.
The offshore team is now focusing on readiness for next year’s subsea cable installation campaigns, with the second campaign expected to begin in the spring. This will involve another 57km of cable from Weisdale Voe on Shetland heading south into the North Sea. The third campaign will take place later in 2023, which will complete the link between the first and second campaigns in the North Sea to join all three campaigns together and complete the full 260km subsea HVDC link.

"We’re delighted that the first cable laying campaign is complete, meaning the first 100km of the Shetland HVDC link subsea cable has safely been installed on the seabed heading north from the Noss Head shore. It has been a complex operation involving multiple parties, and we’re really pleased that this first campaign has been completed safely and successfully."

“At the same time the team has successfully completed the land cable installation works between the shoreline at Noss Head to the new HVDC Switching Station as well as on Shetland, marking a huge achievement and a massive milestone for the project.
“It’s another significant leap forward for the Shetland HVDC link project and builds further on the excellent progress to date.

“The HVDC technology being used to connect Shetland to the GB mainland transmission system provides the most efficient and reliable means of transmitting large amounts of power over long distances via subsea. To reach this stage follows on from years of design work to ensure the cable has robust protection against any damage, including where possible burying the cable in the seabed and installing rock protection where trenching cannot be achieved. Our focus is now on completing the rock placement scope and planning for next year’s subsea cable installation campaigns.

“As always, we thank the local community and stakeholders both onshore and offshore respectively for their cooperation and understanding while we continue with this crucial project, and as ever we’ll work to keep them informed as we move through the phases of the Shetland HDVC link project.”

The Shetland HVDC subsea link project is on track to be completed by 2024.

Click here to learn more about the Shetland HVDC project.