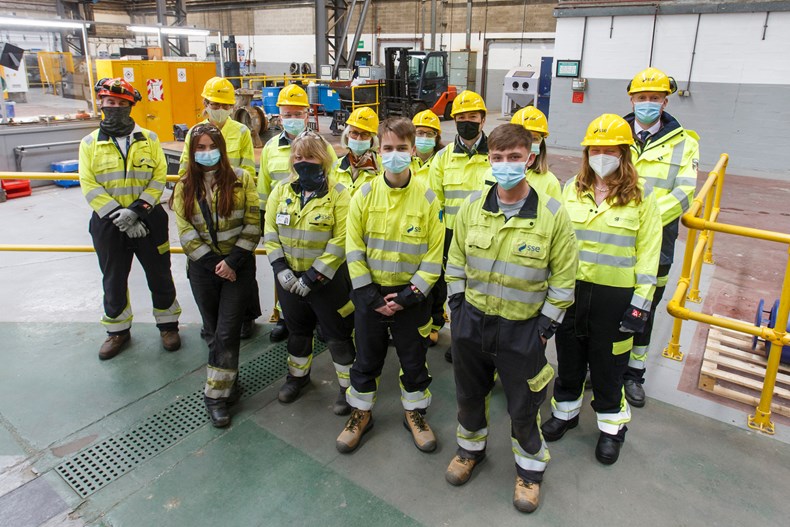 Scotland’s Just Transition Commission has visited Peterhead Power Station to see how plans for a new low-carbon plant would deliver significant benefits to workers and communities in the north-east of Scotland.

SSE Thermal and Equinor are developing Peterhead Carbon Capture Power Station, which would become Scotland’s first power station equipped with a carbon capture plant to remove CO2 from its emissions. The project would connect into the Scottish Cluster’s CO2 transport and storage infrastructure, which underpins plans to deliver one of the UK’s first low-carbon industrial clusters.

The new Peterhead plant would not only allow the site to continue providing flexible power to keep the lights on while backing up renewable generation, it would also secure low-carbon jobs for workers in the region and create significant socio-economic opportunities.

This week, the site hosted members of the independent Commission, which is tasked with scrutinising and providing expert advice on the Scottish Government’s sectoral and regional Just Transition plans, covering the social implications of the net zero transition and reporting annually on progress in ensuring a greener, fairer future for everyone. Rachel McEwen, SSE’s Chief Sustainability Officer, is part of the Commission.

As part of the visit, the Commissioners heard about progress in the development of Peterhead Carbon Capture Power Station and met with a range of workers, including four of the ten apprentices who started work at the site in 2021.

In 2020, SSE became the first company to publish a Just Transition Strategy, which outlined how the company will approach the social implications of delivering net zero; from jobs and training, to working with communities and ensuring no one is left behind.

Over the last 18 months, SSE has become a leader on the just transition to net zero, ranking at the top of the World Benchmarking Alliance’s just transition assessment of 180 global companies. In February, it set four core business goals to 2030, which included a goal to champion a fair and just energy transition by guaranteeing fair work, committing to paying fair tax, and sharing economic value.

"The conversations we had with workers and apprentices at Peterhead Power Station underlined the need for decisive leadership as we accelerate the changes necessary for a net zero future: leadership and engagement with workers and communities is vital for a future that doesn’t repeat the mistakes of the 1980s."

Hannah Bronwin, Director of Business Development for SSE Thermal, said: “Our project at Peterhead will not only make a major difference in reducing carbon emissions and supporting a stable and secure transition to net zero, it will help retain jobs in the north-east of Scotland and create significant economic benefits across the wider region.

“The Just Transition sits at the heart of SSE’s strategy, which is why we were delighted to host Scotland’s Just Transition Commission at the site. We were able to illustrate the importance of Peterhead for Scotland’s energy future, and the potential for our carbon capture project to kick-start wider industrial decarbonisation across the north-east and beyond through the Scottish Cluster.”

In January, SSE Thermal and Equinor entered the Peterhead project into a UK Government competition which aims to support industrial clusters to decarbonise. The project is currently undergoing evaluation as part of the second phase of the process. At the end of March, a Section 36 planning application was submitted to the Scottish Government’s Energy Consents Unit.

The proposed new station could capture an average of one and a half million tonnes of CO2 a year, which would represent at least five per cent of the UK Government’s 2030 target for carbon capture and storage (CCS).