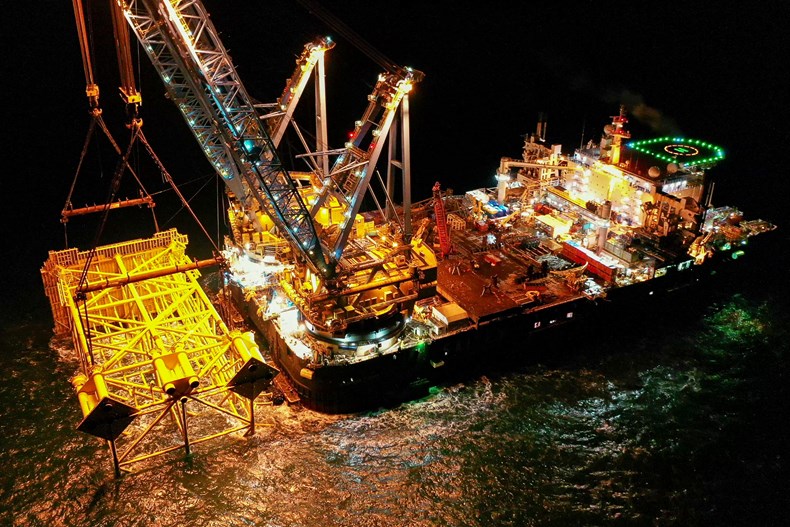 The jacket, which will support the offshore platform substation, was secured on the seabed using the Saipem 7000 heavy lift vessel

Construction of the world’s deepest fixed bottom offshore wind farm, which is also Scotland’s largest, has reached another milestone with the installation of a jacket in preparation for the project’s offshore substation topside which is due to be installed in early 2022.

Engineered, constructed and installed by Petrofac and weighing in at a colossal 5,100 tonnes, the six-legged jacket is now fixed to the seabed, at a water depth of around 55m. It will play a critical role in safely supporting the offshore substation above the sea during Seagreen’s 25 year operational lifespan.

The jacket has a seabed footprint of 43m x 43m and has built in tubing designed to guide the incoming 15 inter-array cables bringing the electricity generated by the turbines to the substation. In addition, the jacket also has tubing to guide the outgoing three export cables from the offshore substation to the seabed.

Situated around 27km off the Angus coast, the £3bn wind farm is a joint venture between SSE Renewables (49%) and TotalEnergies (51%).

At 1.1GW, Seagreen is Scotland’s largest renewable energy project and one of the biggest private investments in Scottish infrastructure. The wind farm will be capable of generating around 5,000 GWh of renewable energy annually which is enough clean and sustainable electricity to power more than 1.6m UK homes.

With the equivalent saving of around 1.6m tonnes of carbon dioxide emissions annually, Seagreen will make a significant contribution to Scotland’s and the UK’s net zero targets.

SSE Renewables is leading the development and construction of the Seagreen project and will operate Seagreen on completion for its expected 25-year lifetime.

"Hot on the heels of the installation of the first wind turbines comes another significant construction achievement with the offshore platform jacket being placed and secured safely on the seabed. Everyone involved can be justifiably proud of achievements like these which set the foundations for the project’s delivery over the next 12 or so months."

John continued: "The  installation of the offshore platform will be undertaken alongside the ongoing Seagreen turbine installation programme and the foundation installation campaign.

"First power is expected by early next year with the offshore wind farm expected to enter commercial operation in 2023."

“We are proud to be part of this important project for Scotland’s energy transition, as engineering,  procurement, construction and installation contractor. The installation of the Seagreen jacket was completed safely amidst Storm Arwen and Storm Barra, using several measures to minimise environmental impacts, such as low hammer energy and acoustic deterrent devices. We will continue to work closely with our partners to prepare for the safe and successful installation of the 4,800 tonne topside in early 2022.”

In addition to the wider economic benefits of the project, Seagreen continues to contribute to the local community in Scotland, whether it’s through the project’s £1.8m community fund, the construction of the long-term operational base at Montrose Port using local contractors, and the creation of long term, skilled roles based out of Montrose in the lifetime operation of the offshore wind farm.