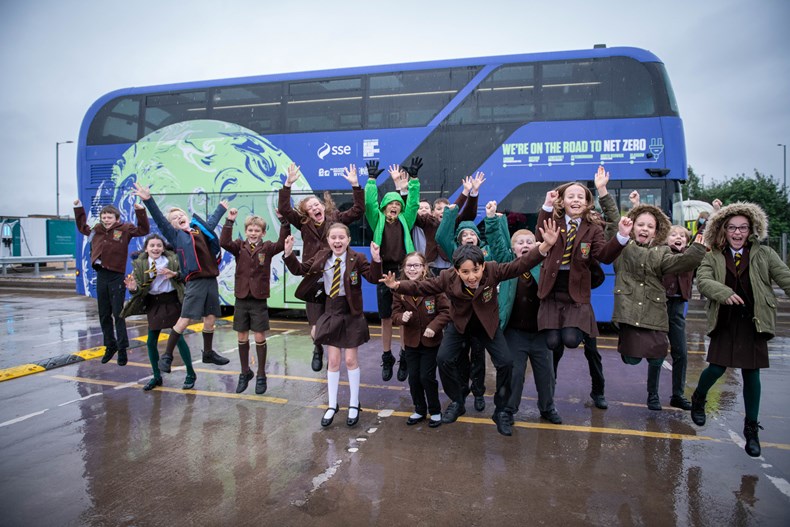 On Thursday the bus visited the Scottish Parliament to give MSPs their chance to learn about the benefits for both the environment and economy of SSE’s proposed offshore windfarm Berwick Bank.

A total of eighteen rain-soaked MSPs turned out to meet our Renewables trainees and apprentices, as well as to see the COP-branded bus as it made its penultimate stop at the Parliament in Edinburgh yesterday afternoon.

MSPs from all sides of the chamber – including the Scottish Government’s Transport Minister Graeme Day met some of our apprentices: Catriona Kilgour, Robert Morrison and Ruaraidh Johnstone who shared their experiences of joining SSE at an exciting time in the energy transition.

Earlier in the day the SSE COP26 bus visited North Berwick where SSE is keen to build an offshore windfarm that could provide enough green energy to power all of Scotland’s households twice over.

Alex Meredith, SSE Renewables’ Berwick Bank Project Director, said: “It was a great opportunity for us to engage with locals in North Berwick and MSPs at Holyrood to show them how Berwick Bank can bring huge benefits to Scotland and the UK. I thought the electric bus was a very good example of SSE working together and thanks to our apprentices who are powering change as we transition towards net zero.”

And the electric bus finished its 11-day tour in Glasgow (29 Oct) with the help of competition winning pupils from Jordanhill School in Glasgow. (see picture below)

They were joined by Secretary of State for Scotland Alister Jack MP and Minister for Zero Carbon Buildings, Active Travel and Tenants’ Rights Patrick Harvie MSP who plugged in the COP26-branded pure electric bus.

The youngsters visited the First Caledonia bus depot, where SSE is helping install charging infrastructure to power 150 clean green buses for Glasgow at what will be the biggest depot in the UK, once finished, and provide cleaner air for the city

Secretary of State for Scotland Alister Jack MP said: “I was very pleased to welcome the arrival of the SSE’s 100% electric bus and see the First Bus EV charging facility, which will do a huge amount to make Glasgow’s transport greener. With COP26 just days away it is vital that we take action across the globe. We all need to do our bit and using more sustainable means of transport is something we can all do.”