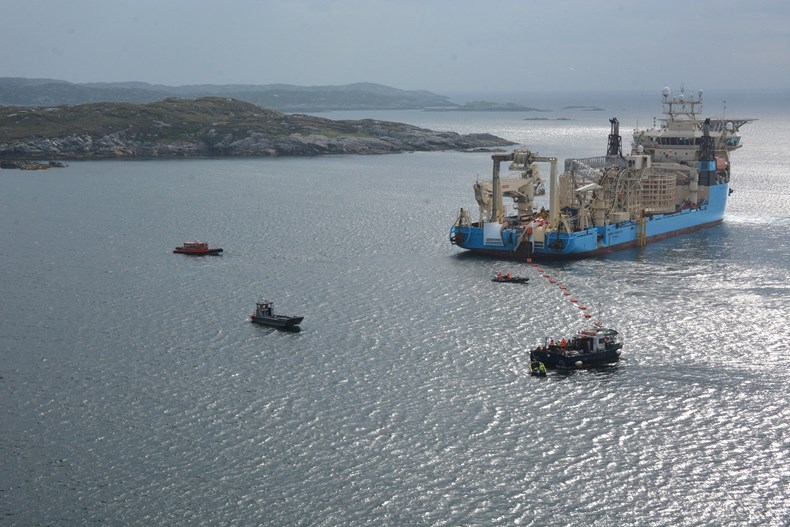 SSEN, part of SSE PLC, has completed a project to replace the subsea electricity cable between Skye and Harris, following a cable fault in October last year.

Teams from Scottish and Southern Electricity Networks (SSEN) Distribution connected and energised the new cable this week before gradually returning the network to normal operation – reconnecting Lewis and Harris to the mainland electricity network.

The project included land-based works at each shore end to connect the new cable to the existing electricity network and restore local beaches at Ardmore and Beacravik to their natural state.

Since October, Battery Point and Arnish Power Stations on Lewis have been running at full-duty operation, alongside on-island renewable generation, to ensure a safe, secure and reliable supply of electricity to local homes and businesses. These stations will now return to back-up operation.

"We’re pleased to complete this essential cable replacement project on time, returning the network to normal operation and removing export restrictions to local generators on Lewis and Harris."

"While reliability of power supplies has been maintained, we recognise the impact to the community as a result of this fault and would like to thank stakeholders, including local generators and wider community partners for their continued patience and engagement during the fault period.

"I’d also like to thank our teams in our operational centres, power stations and contract partners for their ongoing commitment during a highly complex operation to help keep the power flowing and restore the network."

As part of its draft business plan for the next price control period, RIIO-ED2, running from 2023 to 2028, SSEN Distribution is proposing a number of strategic subsea investment projects in the Western Isles, including an upgrade to the circuit between Skye and Uist.

SSEN Distribution continues to assess the future resilience and electricity demand needs for customers and communities on Lewis and Harris. This includes close liaison with SSEN Transmission on its proposed 600MW HVDC transmission link to the Western Isles, which remains subject to developer commitment and regulatory approval.

A third-party study will be carried out prior to SSEN Distribution’s final business plan submission in December to assess options, including the installation of a second 33kV cable between Skye and Harris, if the current transmission needs case is not taken forward. All plans will be subject to regulatory approval.