Greenpeace visit Beatrice to call for a Just Transition 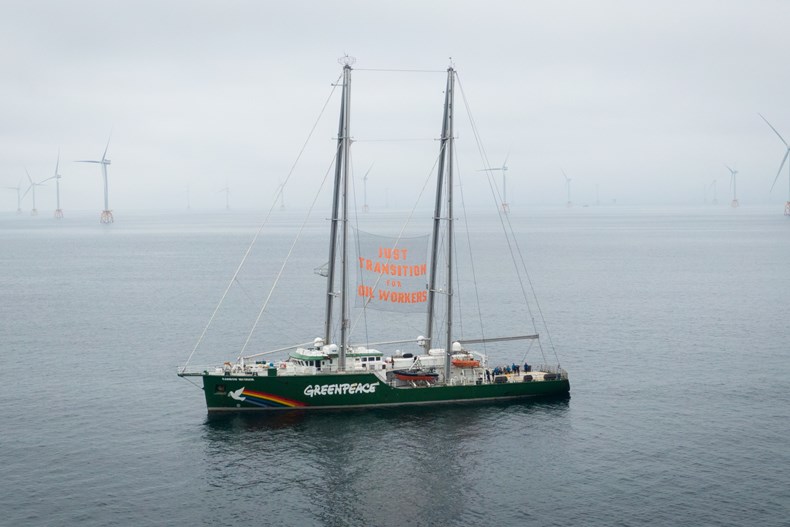 The ship is visiting North Sea communities campaigning in support of a just transition for oil and gas workers.

SSE broke new ground as the first company to publish a “just transition” plan in November last year. Located 13km off the Caithness coast Beatrice – a joint venture partnership between SSE Renewables, Red Rock Power Limited, The Renewables Infrastructure Group and Equitix – is great example of the transition to a low carbon future.

The site was once home to a large oil field. It’s now Scotland’s largest operational offshore wind farm, with two thirds of control room staff having made the switch from the oil and gas sector to renewables.

SSE’s Chief Sustainability Officer, Rachel McEwen, who sat on the independent commission set up to advise the Scottish Government on how to manage the transition, said: “We know the value of the skills people from traditionally high carbon industries have, and how they can play a part in SSE’s low carbon future.

“We were the first to publish a Just Transition plan outlining a key set of principles for fairness to maximise the opportunities for jobs, training and communities in the transition to net zero. And in September we'll be publishing a follow-up report looking specifically at what we've learned about supporting those in high-carbon industries to make the move to low-carbon ones.

“The waters around the north sea of Scotland offer huge potential for the renewables sector. It’s right then that they form the backdrop for this Greenpeace campaign and we’re very pleased to have the Rainbow Warrior visiting, to support and amplify the many voices calling for a just transition.”

Morten Thaysen, Greenpeace UK, said: “We know the UK needs to be moving away from fossil fuels and using much more renewable energy, but in making that switch it’s crucial that industry workers are able to retrain and access green jobs in things like offshore wind and decommissioning.

“We need a proper plan from government, we can’t see a repetition of what happened with ship builders and coal miners. We need a just transition to renewable energy that protects workers and climate.”