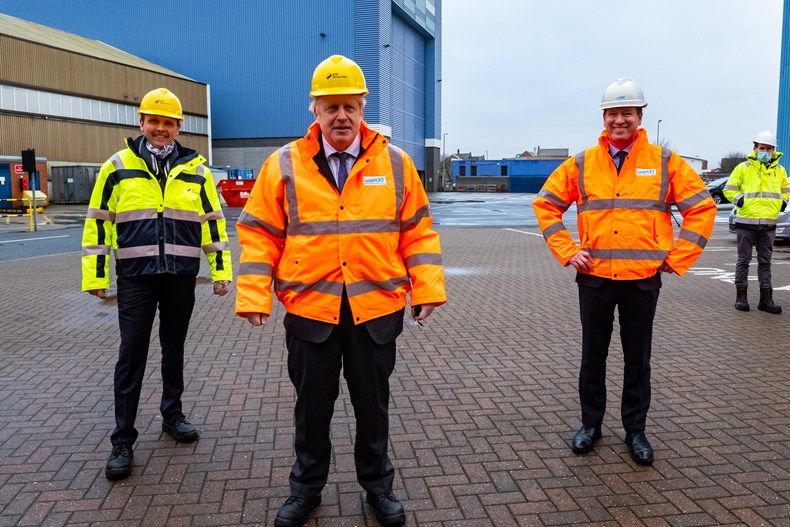 Mr Johnson joined SSE Chief Executive Alistair Phillips-Davies for a tour of the testing facility for the wind farm’s 260-metre-high turbines, which in a single turn, will generate enough energy to energise a UK home for two days.

During the visit UK Prime Minister, Boris Johnson, said Dogger Bank Wind Farm would bring high quality jobs and investment and drive economic recovery. With a focus on skills and opportunities for young people he said the site was central to the UK’s power future, generating jobs and growth for years to come.

"I’ve visited the extraordinary testing facility for wind turbines in Blyth, where I’ve been learning about the fantastic Dogger Bank Wind Farm being developed by SSE.

“I’d congratulate them on what they’re achieving. It’s already the biggest in the world, and we in the UK Government want to expand on that, we want to help SSE to make it even bigger.

“We want to have every home in the UK powered by clean, renewable wind energy by 2030. Dogger Bank is already bringing high quality, high skilled jobs to the north east, giving people the pride and satisfaction of knowing they’re not only helping to allow the UK to meet its net zero carbon targets, but also doing something to make the planet cleaner for generations to come."

The Prime Minister saw for himself the scale of the giant blades that will power Dogger Bank – which will be the world’s biggest offshore wind farm when it’s completed in March 2026.

SSE is building the first two phases of the project with partners Equinor and Eni and is leading on the development and construction of the 190-turbine array.

“This project has been 10 years in the making and the Prime Minister has seen for himself the staggering scale of the components which will be erected over 120km off the Yorkshire coast.

Off the east coast of Yorkshire, the wind farm is being constructed in three phases, each with a generation capacity of 1,200MW. In total, it will produce enough clean, renewable energy to supply 5% of the UK’s demand.

Dogger Bank has created 320 new skilled jobs in the North East with more to come as construction ramps up across 2021.

UK businesses are already benefiting from contract wins including Able Seaton Port in Hartlepool, Port of Tyne and Welsh based Jones Bros who will install the onshore cable infrastructure.

SSE is a key partner to the UK Government on COP26 and has set its own ambitious targets to reduce its carbon emissions by 60% by 2030 and be net zero as a business by 2050. It is accelerating the UK’s decarbonisation efforts, providing the solutions, assets and infrastructure to support the electrification of the economy.