A real gem in hydro history

Rannoch power station, part of the Tummel Garry scheme has reached an incredible and rare milestone by generating power for 90 years.

Formally inaugurated on the 30th November 1930, the site has been well maintained to keep it in full working order and to the present day, it continues to be part of SSE Renewables contribution to decarbonising the power sector and achieving net zero emissions by 2050. We wanted to celebrate Rannoch’s important role and couldn’t miss an opportunity to delve into our archives to help celebrate its special anniversary. 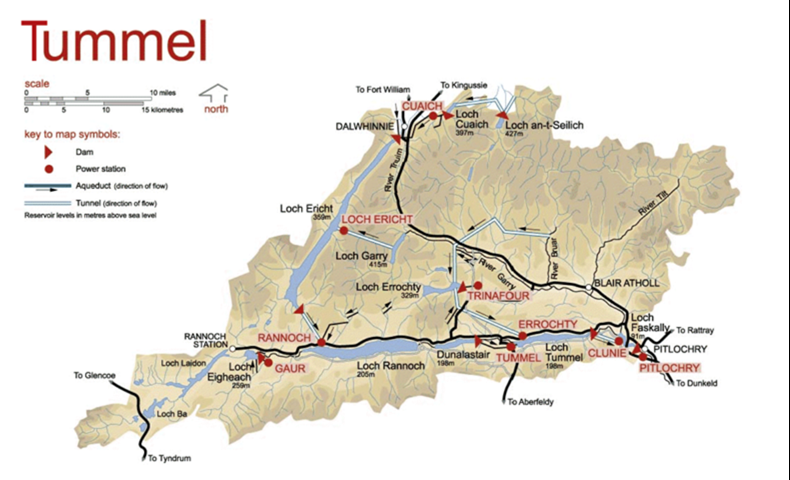 The power station was constructed by Balfour Beatty & Co and originally owned and operated by the Grampian Electricity Supply Company. Construction pre-dated the 1943 Hydro Electric (Scotland) Act and eventually the newly formed North of Scotland Hydro Electric Board took over the power station in 1948. Ownership has remained within the same company ever since and forms part of the SSE Renewables UK Ltd hydro portfolio. 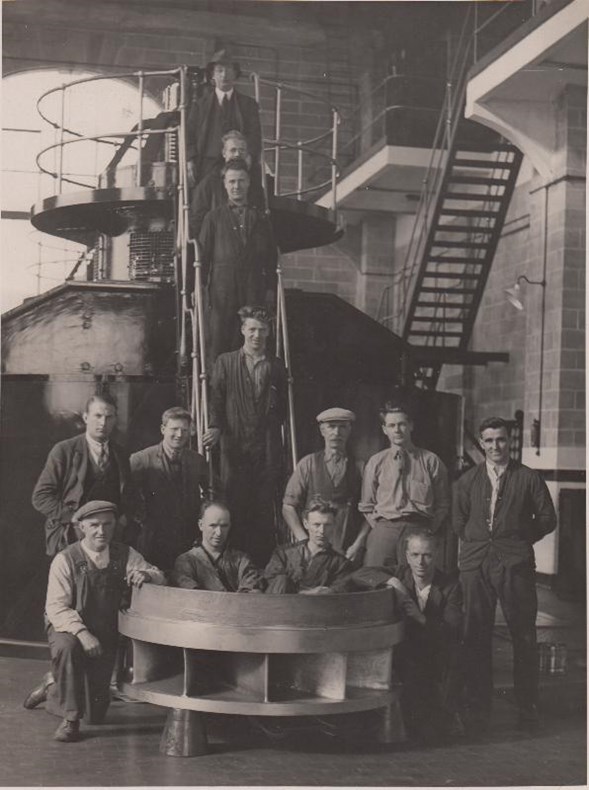 The power station was camouflaged throughout the war to help protect it from air strikes.

"The Grampian Hydroelectric Scheme was the first major public supply development which utilised high head reservoir storage technology (as opposed to run of the river technology as employed at Galloway - see separate listings). The geography of the Tummel valley was well suited to the development of a hydroelectric scheme, but local demand for electricity was insufficient to justify its completion. The development of the national grid in the mid-1920s meant that power generated in the Highlands could be exported to the populous central belt. The Central Electricity Board guaranteeing an assured market for the Grampian Power Company prompting further development. The relatively unforgiving terrain made construction difficult, and significant development of road infrastructure was required, including a new bridge at Tummel to allow access for the transportation of major pieces of structure from the nearest rail link at Struan."

Construction began in September 1928 with a cost attached of £175k (£8m in today’s money) and was described as ‘wonderful piece of engineering expeditiously carried out’ by the local press at the time.

Construction works and parts being delivered to Rannoch construction site in 1928/29.

During construction approximately 1,000 men were continuously employed, and their job included the back-breaking excavation of around 165,000 tonnes of rock to create the 2 ¾ mile long tunnel through the hill between Loch Ericht and Loch Rannoch.

The big switch-on went without hitch, however it was a private affair and conducted in the presence of the engineers and other construction workers. This included the director of Balfour, Beatty & Co, the resident engineer, chief electrical engineer, chief engineer for Balfour, Beatty & Co. and the engineer manager of the Scottish Central Electricity Supply Co and the Grampian Electricity Supply Co. 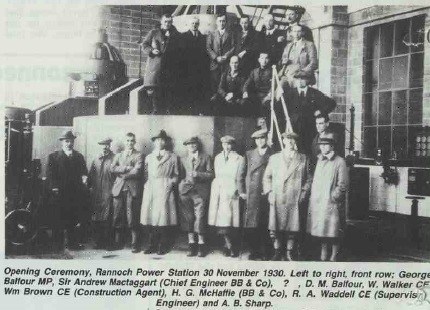 "Sir William Halcrow was one of the foremost engineers of the twentieth century and was highly experienced in the development of hydroelectricity having served his apprenticeship with Thomas Meik and Sons, the company responsible for both Kinlochleven and Lochaber water power schemes on behalf of the British Aluminium Company (see separate listings). His work on the Grampian scheme came in between the Kinlochleven and Lochaber developments, and his experience in developing the Kinlochleven scheme can clearly be seen in the highly efficient pioneering nature of the Tummel Garry development. Halcrow's association with hydropower and water engineering was longstanding and after 1943 he went on to work on several projects for the North of Scotland Hydro-Electric Board including the Glen Affric and Glen Morriston schemes. The company also completed work elsewhere in the UK and overseas."

The power station has an installed capacity of 44.1MW with three Francis turbines that operate under a gross head of 156m. It is fed by tunnel and pipeline from Loch Ericht and outputs into Loch Rannoch. Kinloch Rannoch Weir controls water flowing from Loch Rannoch into Dunalastair reservoir. The low dam is designed to provide enough upstream depth while still allowing water to flow through, the height of the weir can be adjusted as required.

Rannoch power station was last refurbished 20 years ago in 2000 when £10m of upgrades were made. It is an important part of SSE Renewables portfolio – both historically and operationally and we’re proud of the role this gem continues to play as we drive the transition to a zero-carbon future.

To find out more about SSE’s Heritage please visit www.sseheritage.org.uk or connect with us at heritage@sse.com or on our social channels @sseheritage (Facebook, Instagram and Twitter).