Five years of the Living Wage at SSE 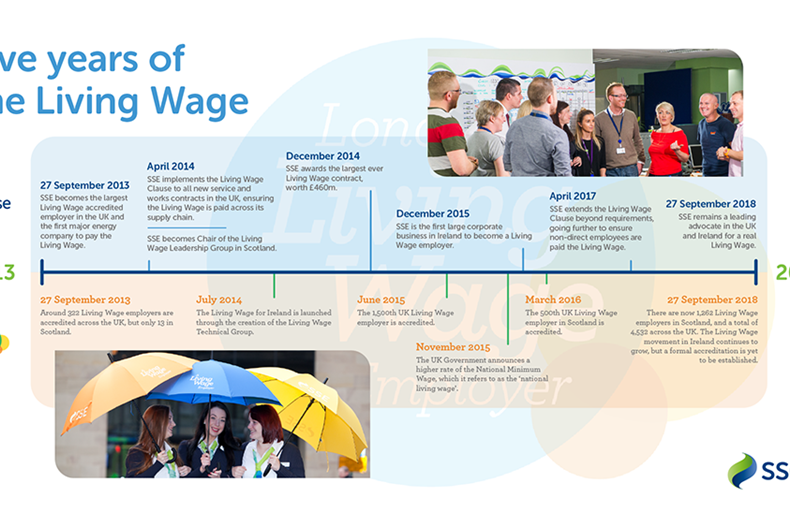 27th September 2013 was a big day for SSE. That was the day that we became – at the time – the biggest living wage employer in the UK. Most Living Wage employers back then were charities or public sector organisation. Only a handful of very big companies had taken the leap and signed up to a set of enhanced – but voluntary – standards.

The view from business at the time might have been “we’ve got enough rules to abide by – why on earth would we choose to sign up to some new ones voluntarily?”

That was certainly one of the arguments inside SSE.  A laser-like focus on regulatory compliance meant there was an instinctive nervousness to sign up to some new rules we didn’t have to do.  There was not a question that SSE would not pay its own employees a Living Wage; what there was, was a reluctance to put our head above the parapet and be publicly accountable for the commitment.

But good sense won the day for three core reasons.  The first was an ethical one: people who worked for SSE – directly or contracted onto our sites - absolutely deserved to be treated with the respect that mean they could live a decent life free from poverty.  The second case was a business one: employee morale, retention rates and employee engagement would improve with the living wage.

And then there was a third judgement.  SSE is a big company involved in providing energy which is an essential service.  That means we have a leadership role when it comes to good business conduct.  We are one of the biggest companies in the UK and Scotland and we could send an important signal to our suppliers and the wider business community of the importance of paying a wage rate that protects employees from in-work poverty.

There’s now over 4,500 UK businesses that pay the real Living Wage, with more than 150,000 people receiving a pay rise - improving the lives of families across the country. But despite the progress that has been made, there’s still a long way to go. 14 million people across the UK live in poverty, 60% of which live in families where at least one person is in work. It’s clear that, while the Living Wage campaign has grown and matured, we still need it now as much as it was five years ago.

So on this 5th anniversary of SSE’s Living Wage accreditation we recommit for the long term – and we’ll continue to do all we can to support more businesses join the movement too.  Because it is in all our interests that the UK has a fair, inclusive and growing economy.