New research commissioned by energy firm SSE and ICAS, the leading professional body of Chartered Accountants, has exposed the credibility gap between the public and big business when it comes to trusting companies on their approach to paying tax.

The YouGov study found only a third of people think most big businesses in the UK pay their fair share of tax, compared to four out of every five people believing small businesses do.

Just 6% would trust a company to provide accurate information on whether they are paying the right amount of tax and only 10% think it is acceptable for companies to move their base of operations abroad to avoid paying corporation tax in the UK.

The findings reflect concern that, seven years after the economic crash, big business has still not done enough to rebuild trust and recognise its essential role in contributing to the society it relies on to be successful.

The results have been released ahead of a debate on ‘The good corporation and its role in modern society’ in London tonight (June 9th).

SSE Chief Executive, Alistair Phillips-Davies, said: “These findings from YouGov offer an alarming insight into the relationship between company behaviour on tax and consumer trust. Big business has a major job on its hands to convince the public that it is paying taxes fairly.  The consequences of not doing so go to the heart of our legitimacy within the societies we serve.

“Tax is not a penalty for profit; it is the proper way to contribute to the society that enables your business to be successful.

“Paying the appropriate amount of tax, in the right place and at the right time is core to this; and at SSE we remain determined to abide by the spirit and letter of tax regulations. We have explicitly ruled out the use of artificial tax avoidance schemes and tax havens; we have disclosed much greater tax detail on our accounts and last year we were the first FTSE 100 company to be awarded the Fair Tax Mark.”

Jim Pettigrew CA, President of ICAS (Institute of Chartered Accountants of Scotland), said: “The survey demonstrates that big business has got a long way to go to convince the public that companies have earned their trust on taxation.

“Ensuring companies behave in the right way and improve transparency and communication is key to changing this perception. There is a difficult mountain to climb for business and the profession to explain the tax landscape to the public.

"We must encourage better public understanding of the value of our advice and the role we play. There is also a pressing need for better tax legislation to be enacted which minimises complexity and reduces the grey areas where so much of the ambiguity lies. The recently published ICAS call for a clearer long term strategy for the UK tax system shines a light on these issues.”

The YouGov poll questioned almost 2,000 adults seeking their views on what is acceptable and unacceptable behaviour by big companies when it comes to managing their tax affairs and how a company’s attitude to tax affects their trust of that company.  The headline findings include:

The SSE-sponsored ‘Good Corporation’ debate in London will consider how the impact of the financial crash and the grave economic events that followed has devastated trust between consumers and big business. It poses the question; seven years on, what do people now expect from UK corporations? Should a company’s core purpose reflect society's wider expectations?

As part of a wide ranging discussion, SSE and ICAS will present the results of their exclusive YouGov survey on public attitudes to tax avoidance. The event will be chaired by Tim Montgomerie, Times columnist and founder of The Good Right and the panel includes Helena Morrissey, CEO, Newton Investments, and Jim Pettigrew, President of ICAS. 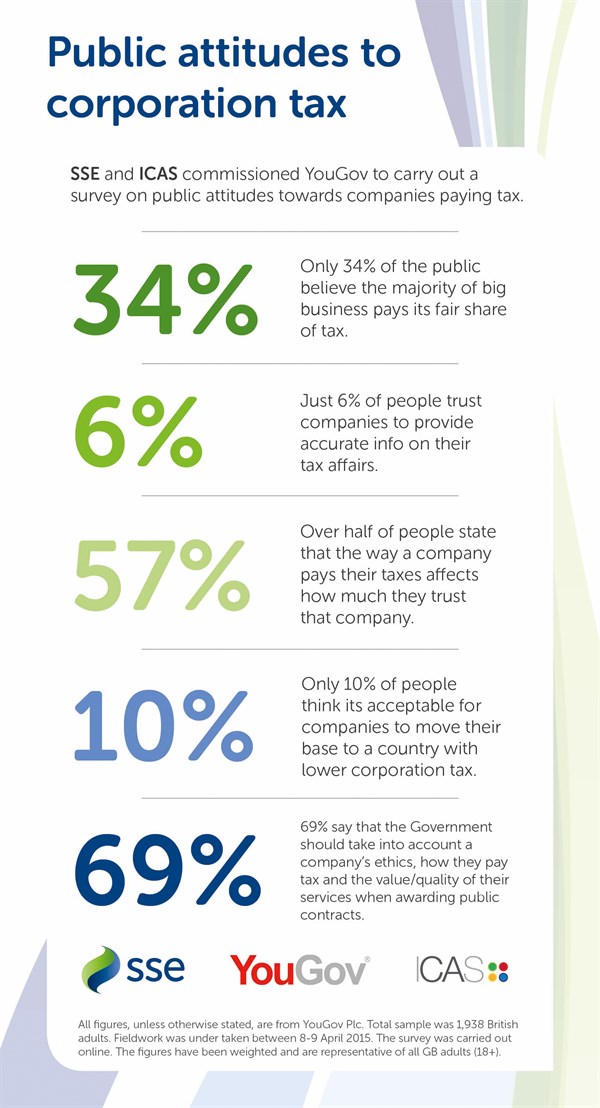